Dooars is a mystique land. It never disappoints its travellers when it comes about scenic beauty and charm. Whether you seek an adventurous trip or want to spend some quality time alone, the mesmerizing Dooars has them all. So, with our Raimatang Tour Packages, let’s explore Raimatang and its nearby tourist attractions. Raimatang dwells on the fringe of Buxa Tiger reserve and just 45 km away from the main town of Alipurduar.

Moreover, it is worth mentioning that our tour packages are completely customizable, hence you can choose your accommodations, sightseeing, meals as per your tastes and choices. So, have a look at this specially designed tour packages and contact us to customize it as per your preference. 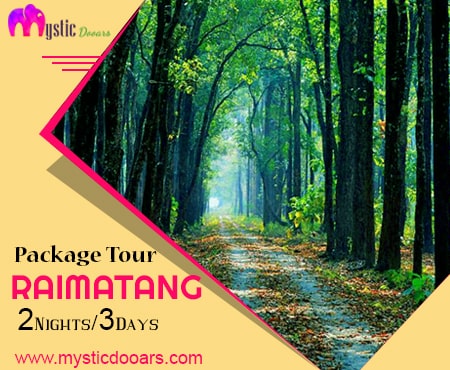 Those who want to experience most of the attraction of Dooars in a shorter period of time, 3 Days Raimatang tour is for them. With this package tour, you will be touring to Buxa, Jayanti, Rajabhatkhawa, Raimatang, etc. 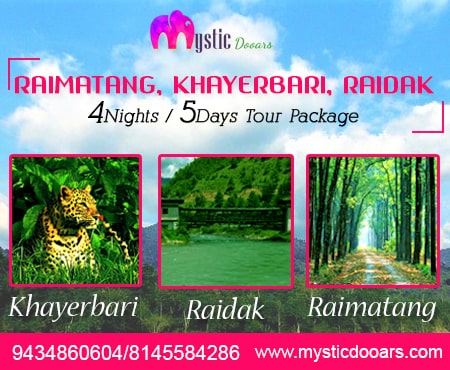 Our exclusively designed 4 Nights 5 Days package will take you to plenty of sightseeing places such as Raimatang, Raidak, South Khayerbari, Bhutanghat, etc. 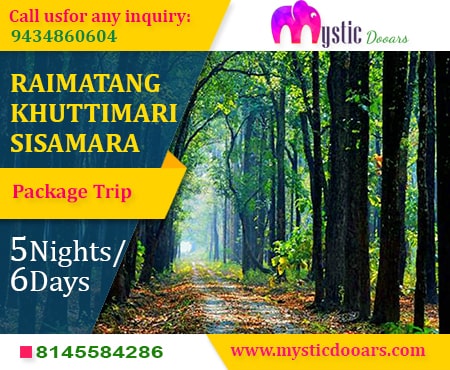 In our 5N/6D Raimatang Tour Packages, you are going to explore some of the renowned destinations in Dooars. However, as the package is customizable, you can include or exclude any places from the tour plan just by calling us. 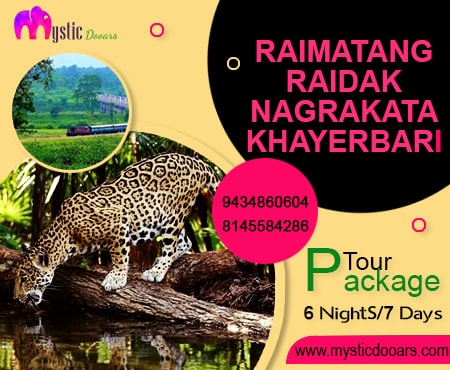 This is one of the longest Raimatang Tour Packages offerings from Mystic Dooars. Our tour experts designed it, offering you to enjoy most of Dooars. With this tailor-made tour packages, you will be taken to most of the prominent places of Dooars.

Raimatang is a tiny settlement situated beside the widely renowned Buxa Tiger Reserve. It is a scenically blessed forest village sited beside the shimmering Raimatang. It is far from the city crowd and also able to escape from the rush of tourists. Due to its serene ambience, Raimatang and its nearby destinations are thriving rapidly as one of the tourists’ first choices. So, here are the destinations you are going to cover with Raimatang Tour Packages.

Sightseeing Places in and around Raimatang

Whether you opt for a 3 Days tour plan or 7 days one, you will always be provided with the finest tour experience. The sightseeing places you will be exploring are as follows.

Raimatang, the tiny village, does not offer too much sightseeing places. It is quite popular for its tranquil atmosphere and the scenic beauty of it. The Watch Tower of Raimatang is the only attraction here. The wildlife of the Buxa Tiger Reserve can easily be seen from this Watch Tower.

Buxa Forest is one of the largest in Dooars. The dense forest of it is them natural habitat of many wild animals such as Royal Bengal Tiger, Asian Elephants, Gaur, Sambar, Deer, etc.

Jaldapara Wildlife Sanctuary is another main attraction of Raimatang Tour Packages. It is quite popular for One-Horned Rhinoceros. You can also get to see Royal Bengal Tigers, Deer, Bisons, Elephants and Indian Python here. To witness the wildlife of Jaldapara quite closely, Elephant Safari or a Jeep Safari is available.

Rasikbil is a scenic lake of Tufangonj Town of Coochbehar district. This large lake is surrounded by thick forest and is known as a birding paradise among tourists. You will get to see many migratory birds from Central Asia and Ladakh. Moreover, there is also a deer park, crocodile rehabilitation centre, tortoise centre, leopard rescue centre which increase the charm of this lake.

Totopara is a small village near the Indo-Bhutan border. Sited beside the Jaldapara National Park, it the village of Toto, one of the ancient tribes in West Bengal. This ancient community is known for its unique culture, heritage and lifestyle.

In our Raimatang Tour Packages, Khuttimari is a newly discovered in Dooars attraction quite renowned for its dense forest. The green lush forest of Khuttimari is the natural habitat of many wild animals. If you are lucky enough, you may spot some wild animals from the watchtower.

Situated on the banks of river Torsha, there is a unique less trodden destination named South Khayerbari. There are a leopard and Royal Bengal Tiger Rescue Centre where you may spot many wild animals. Unlike other forests of Dooars, the forest of South Khayerbari does not remain closed during the season of Monsoon.