Alipurduar, located in the riverbank of Kaljani River on the foothills of Himalaya, is the gateway to North-East India and Bhutan. Enclosed by looming mountains, lush green forest and gushing rivers, Alipurduar is undoubtedly a paradise for nature lovers. With our Alipurduar Tour Package, get closer to the beauty of it and spend a memorable holiday while exploring the biggest national reserves of the country.

Alipurduar's spectacular views, unique flora and fauna and a pleasant climate will undoubtedly make your holiday a perfect one. Here are the Alipurduar Tour Packages we are offering for the travellers like you. 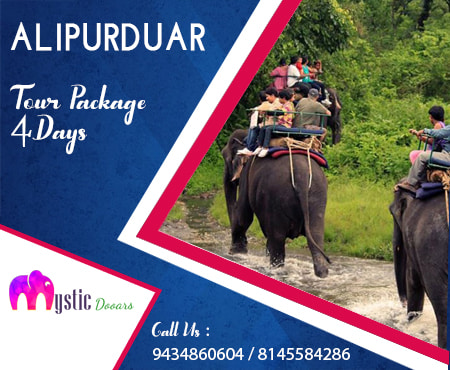 This Alipurduar Package Tour for 4 days is made in a way to cover most of the Alipurduar and its adjacent places in a limited time. The entire tour plan will be as mentioned below.

In this package tour for 5 days, you will be taken to all the prominent places of Alipurduar such as Buxa Tiger Reserve, Buxa Fort, Jayanti etc. Moreover, sightseeing places of Cooch Behar is also included. 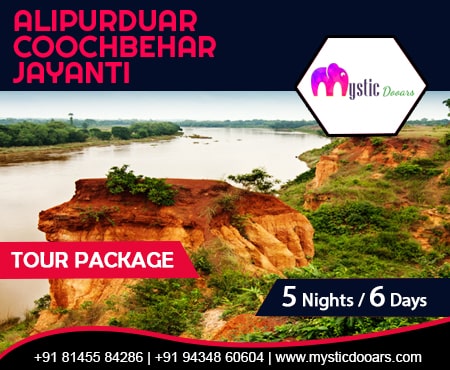 In all of our Alipurduar Tour Packages, our tour experts have tried to cover all the popular tourist attractions. However, all these tour packages can be designed and planned again as per the request of the travel freak visitors like you.

Sited adjacent to the Torsa River, Jaldapara Wildlife Sanctuary is replete with luxuriant vegetation and a rich variety of wildlife. A large number of one-horned rhinoceros live here in this national park. Other wild animals of the park include Elephant, Deer, Barking Deer, Royal Bengal Tiger, Bison, Hog Deer, Spotted Deer, etc. Moreover, it is also a natural habitat of many feathered creatures like the Bengal Florican, Crested Eagle, jungle fowl, peafowl and many more. Furthermore, Jungle or Elephant Safari is also available amidst the lush green forest of Jaldapara.

Situated just 24 km away from the main town of Alipurduar, Buxa Fort is the paradise for the trekkers. It was once a prison to captivate the freedom fighters of India by the British. The fort is now in ruins. But due to its intense historical significance, visitors usually trek to it. With our Alipurduar Tour Package, now you can have adventurous trekking towards Buxa Fort and have a breathtaking view of the river Jayanti.

Rajbari Palace is an antique construction in the Cooch Behar district. The palace was built during the rule of Maharaja Nripendra Narayan. The palace looks like a replica of the Buckingham Palace in London. However, the main gate of the palace inherited its design from St. Peter's Church in Rome.

Located just a few meters walk away from the Rajbari Palace, The Madan Mohan Temple is another fascinating structure to visit in our Alipurduar Tour Packages. Baleswar Shiva Temple is another popular tourist site dedicated to Lord Shiva. The peaceful environment of the temple is quite captivating for the visitors. Furthermore, the nearby temple full of tortoises increases the beauty of this sacred site even more.

Rasikbill is a spectacular lake to explore with our Alipurduar Tour Packages. Enclosed by the thick forest, it is the paradise for bird watchers as birds like cormorants, storks, parrots, spoonbill, kingfisher, owl, and many others can easily be detected here. Moreover, the crocodile rehabilitation centre, leopard house, tortoise rescue centre, and python house are other tourist attractions near Rasikbil.
Sagar Dighi, also known as the "great pond" among the locals, is a huge lake in Cooch Behar. Due to its mesmerizing and birds friendly atmosphere, many feathered migratory creatures get attracted towards it. As a result, the lake becomes a hot favourite among the bird watchers.

Buxa is a tiger reserve in the Alipurduar District of West Bengal is a picturesque attraction in our Alipurduar Tour Packages. The reserve is popular for Royal Bengal Tiger. However, it also habitats wild animals like leopard, mongoose; Asian Elephant, Gaur, Hog Deer, Wild Buffalo, etc.

Raimatang is a tiny village and also a thriving tourist spot to visit in our Alipurduar Tour Packages. It does not offer too much sightseeing options and mainly known for its peaceful atmosphere and natural beauty. However, there is a watchtower in the village that offers a breathtaking panoramic view of the adjacent Buxa Tiger Reserve.
Sited beside the meandering Raidak River, Raidak is a hamlet full of tourist-friendly attractions. The forest of Raidak is one of the elephant corridors of Buxa Tiger Reserve. Hence, you can spot plenty of wild animals here in the forest of Raidak.