Cooch Behar is one of the pristine holiday destinations in the Indian State of West Bengal. This princely town was one the kingdom of Koch Dynasty. As a result, Cooch Behar bears a unique historical significance and culture. With our Cooch Behar Tour Packages, get to know the rich heritage and culture of Cooch Behar. Visit all the tourist attractions and get friendly with the ever-smiling local people.

Cochbehar with its historical architectures and scenic places always captivate the mind of holidaymakers. With our tailor-made Cooch Behar Tour Packages, we will offer you to see this breathtaking town in a new way. As all of our tour packages are tailor-made, you can plan your trip as per your likings. 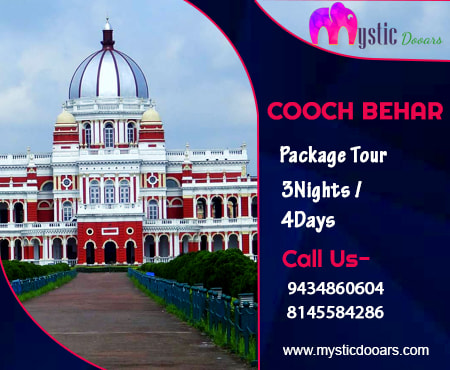 Get closer to the history and culture of Cooch Behar with this 4 days package tour. The tour plan will be as mentioned below. 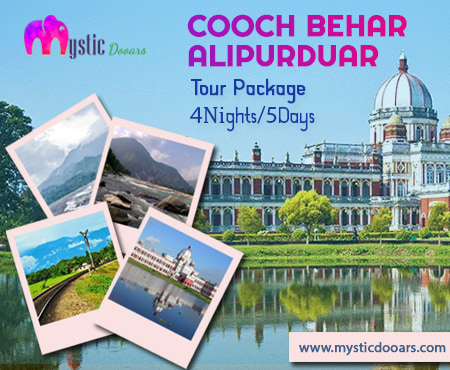 In this package tour for 5 days, you will be taken to all the prominent places of Cooch Behar such as Rajbari Palace, Sagar Dighi, Madan Mohan Temple, Baneswar Shiva Temple, etc and Alipurduar’s Buxa Tiger Reserve, Buxa Fort, etc.

All our Cooch Behar Tour Packages are designed in a way to cover most of the tourist attractions in a limited day. Here are the tourist interest places you will observe if you opt for one of our tour packages.

Rajbari Palace, also known as Victor Jubilee Palace, is an ancient architecture in the Cooch Behar district of West Bengal. The palace was formed during the rule of Maharaja Nripendra Narayan. The palace looks magnificent and was inspired by the Buckingham Palace in London. However, the main entrance of the palace resembles the design St. Peter’s Church in Rome.

Located adjacent to theRajbari Palace, The Madan Mohan Temple is another fascinating architecture with our Cooch Behar Tour Packages. The temple was built two years later of the palaces. As a result both of them bear equal historical significance. Baneswar Shiva Temple is a sacred site in Cooch Behar, dedicated to the Lord Shiva. The tranquil atmosphere of the temple is quite captivating. There is a pond full of tortoises adjacent to the temple which increases the beauty of this place even more.

Rasikbill is a scenic lake situated in the Coochbehar district of West Bengal. Surrounded by the dense vegetation of Cooch Behar, it is the paradise for bird watchers. Birds like cormorants, storks, parrots, spoonbill, kingfisher, owl, and many others can easily be seen here. Moreover, there is also a crocodile rehabilitation centre, leopard house, tortoise rescue centre, and python house in this place which attracts countless tourists every day.

A thick woodland replete with rare flora and fauna, Chilapata Forest is undoubtedly a must-visit site in all of our Cooch Behar tour Packages. The jungle Safari of Chilapata will take you closer to the wild animals like one-horned rhinoceros, elephants, bison, deer, leopard, sambar, etc.

Kodalbasti has all the qualities to be called as the perfect holiday destination. It is a small village in the Alipurduar district of West Bengal. It is a part of the Chilapata forest. As a result, the glimpse of the rich flora of Chilapata can also be observed here.

Buxa National Park, a tiger reserve in the Alipurduar District of West Bengal is also a scenic attraction in our Cooch Behar Tour Packages. Fierce animals like Royal Bengal Tiger, leopard, mongoose; Asian Elephant, Gaur, Hog Deer, Wild Buffalo, etc are easily spotted here in this forest.
Buxa Fort is the ancient ruins once ruled by the Bhutan King. Later the British took over it. During the domination of the British, they used the fort as a prison for the rebels of India. The imprisonment of Subhas Chandra Bose, one of the notable freedom fighters of India increases the popularity of Buxa Fort more than anything.