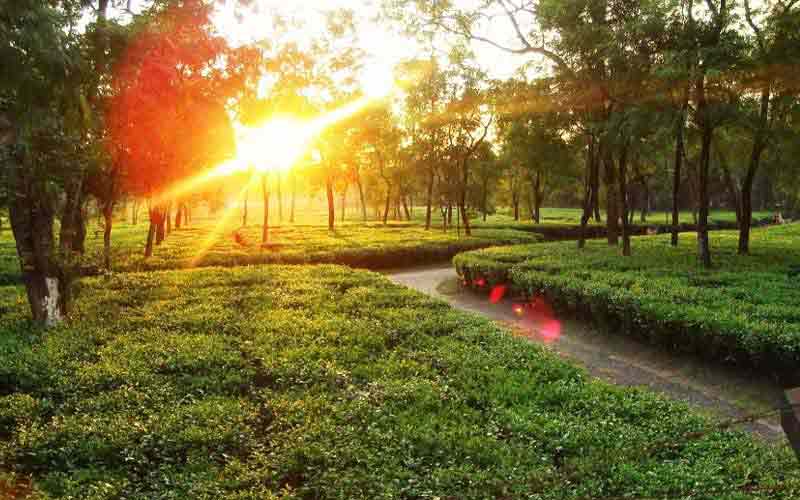 Enclosed with vibrant lush tea garden is a quaint village located 8km from Mal in Jalpaiguri District, Damdim. Damdim with its verdant lush garden has caught the attention of many tourists traveling to Dooars region. The name Dam Dim has its origins in the name of an insect Dim Dima, found in the North East. An interesting anecdote supports the origin of the name. Immediately after the fire in the Hatkhola factory, the engineer entrusted with the refurbishing of the place, was apparently quite fed up with the monotonous Carte "Du" Jour. His breakfast, which mostly comprised of an omelet or some other egg preparation, was not much to his liking. Here eggs are known as 'Deem'. Having been quite hassled about his regular meal, his frequent outbursts 'Damn Deem', gave rise to its current name. In and around this small village there are many enchanting spots noteworthy among them are Dam Dim Tea Estate, Gorubathan, Gorumara National Park, Bindu, Murti, Samsing and Lataguri.

Places to See in Damdim

Surrounded with lush tea garden the journey towards the picturesquely blessed village Damdim is an unforgettable experience in itself. Traveling in a road which is sprawled with the pictorial view of the changing vegetation of paddy field and tropical forest and the sight of the river teesta meandering through the mountainous valley dotted with the lush alpine forest offered while crossing the famous Coronation Bridge is a visual treat for the tourists during the blissful journey towards Damdim. The lingering essence of British era can still be felt in Damdim through the architecture and tourist can still relish the rich colonial culture in the Tea Estate of Damdim. The estate is divided into three divisions namely Hatkhola, Barrons and the North Grant Division. The past glory of Damdim Tea Estate can be seen in the 150 year old heritage Tea Garden Bungalow named as "burra sahib bunglow". This place was the residence of the manager of Dam Dim Tea Estate. Now the burra sahibs are gone but efforts are underway to restore the bungalows to their past glory and give the well-heeled traveler a taste of the planter's lifestyle. Tourists may also visit Western Dooars Club of Damdim which was once the hub of the planter's social life. Its great institution features a teak dance floor, a billiards room, a lavish kitchen, a bar and of course sprawled alongside it, an 18-hole golf club. The burra sahibs and the mem sahibs have left and along with them have gone the glitz and glamour of the lavish balls and the stylish do's. Once the lively bungalow is now covered under the heavy dust and the green rolling meadow of golf course is now left deserted but yet the alluring charisma of Damdim is still not lost. The sight of verdant tea garden sprawled around the decade old bungalow, which still has the essence of glorified days, has lured many travelers towards Damdim.

Take a stroll around the lush garden through the winding walking paths while feasting your eyes with the astounding vista of the vibrant tea fields stretched out for miles in Damdim. Far from the maddening crowd with the touch of history Damdim sited amidst the verdant tea garden has become a solace for the tourists who like to know more about the process behind making tea leaves and gaze upon the British era architecture while traveling to Dooars.

The beauty of the lush tea garden of Damdim can be relished throughout the year but winter season from mid November to January is believed to be the best time to visit Damdim due to the soothing weather.