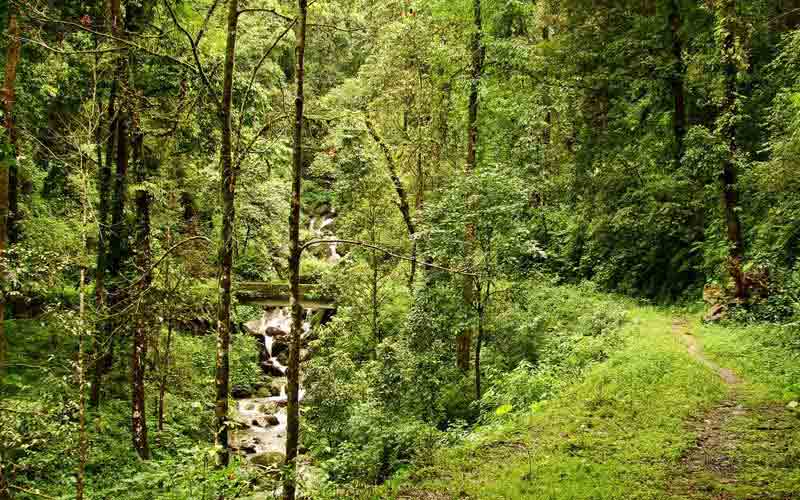 Situated just before Bhutan border, about 107 kilometer from Siliguri is the last hamlet of West Bengal, Bindu. Perched at an altitude of 2000ft along the meandering river Jaldhaka, scenically blessed with the view of daunting lofty hills and increase demand of tourism in Dooars, Bindu has emerged as a favored offbeat destination of Dooars region. The word "Bindu" is derived from Bengali word which stands for the word "point". Bindu is famous among the traveler for offering an astounding vista of Dooars plains and mountainous valley of Bhutan.

The journey towards this scenically blessed hill station Bindu is an unforgettable experience in itself. Traveling though the thick deciduous forest of Chapramari, the oldest forest reserve of West Bengal, while spotting some untamed animals like bison and elephant to reach Bindu can be an enthralling experience. On the way to Bindu tourist can also visit a place called Gairibas Diascorrea Plantation which may be the safe haven for botany enthusiast since it has a large area under used for the cultivation of medicinal plants. Sited on the foothills of Himalayas, Bindu is famous for the cardamom plantation. There are many tourist interest points in and around Bindu which may hype the interest of tourist visiting Bindu like Bindu Dam on the river Jaldhaka between India and Bhutan is one of the famous attractions of Bindu. River Jaldhaka is created by the conjunction of three rivers which meets at Bindu. The three river being Bindu Khola, Dudh Pokhri and Jaldhaka that originates from the Kupup lake, a small glacial lake in Sikkim. The main purpose of the construction of Bindu dam was to control the supply of water to the Jaldhaka Hydel Project at Jhalong. The dam offers panoramic view of the gushing river and hills surroundings Bindu. Apart from offering an astounding vista Bindu dam has also become the ideal place for acting as the breeding ground for the migratory water fouls making Bindu a favored tourist destination in Dooars region. The forest surrounding Bindu is quite famous among adventure seekers as it gives ample opportunities to enjoy activities like trekking and hiking. Tourist can also visit the Godak Village 15km from Bindu. The tribal people of Godak Village worship a rock which is considered as to be a sacred place since the river stream generated from that rock never dries up. One km prior to reaching Godak Village tourist may also visit cardamom curing centre of Bindu which is said to ship the best cardamom in the country after being dyed and processed. Dotted with pictorial sites along with serene ambiance Bindu is a must visit destination of Dooars if tourist wants to see the best of Dooars.

Stroll through the dense forest while listening to the melodious chirping of Himalayan birds and gushing water of river Jaldhaka. Far from the maddening crowd blessed with scenic view, Bindu with its serene ambiance has become the sojourn for the tourists who want to spend a laid back weekend while being amidst the nurturing lap of Mother Nature.

The beauty of the scenically blessed hamlet Bindu can be relished throughout the year due to its soothing weather but the time to visit Bindu is considered to be the winter season from November to mid January when tourist can get an unhindered view of Himalayan range while spotting some migratory birds which reside in the verdant forest surrounding Bindu during winter.