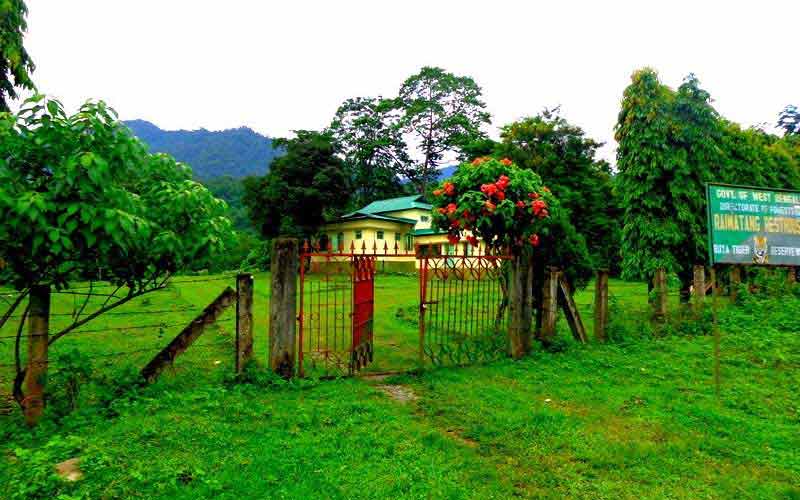 Located 45km from Alipurduar within the vast emerald green woodland is a quaint forest village in the western Buxa area in the dooars region called Raimatang. The quaint hamlet Raimatang has gained its prominence in the field of Dooars tourism for being a scenically blessed forest village. Sited along the meandering river Raimatang inside Buxa Forest, far from the hustle and bustle, Raimatang is surrounded by lush tea gardens and lofty hills, the sight of which has lured travelers towards Raimatang. The unique location of Raimatang has made it a favored offbeat destination of North Bengal.

Places to Visit around Raimatang

The journey towards this forest village Raimatang is an unforgettable experience for the tourists. Travelling through the dense rain forest of the Buxa Tiger Reserve and if lucky might even spot some wild animals while crossing the Raimatang River can be a visual treat for the tourists. Situated close to Bhutan border, Raimatang is endowed by the rich flora and fauna due to its proximity with the Buxa Tiger Reserve, the sighting of untamed animals is a common occurrence in Raimatang. Raimatang is a sojourn for nature lovers so if the visitors are looking for tourist interest point in Raimatang they might be disappointed since Raimatang only offers a serene ambiance amidst the lap of Mother Nature where they can find nature at its pristine form. Tourists may observe the wildlife and get the panoramic view of the Buxa Tiger Reserve and vast water bed from the watch tower at Raimatang. There are many activities in Raimatang which the tourist can partake in like angling in the sparkling river Raimatang, jungle safari in Buxa National Park. Buxa forest is known for housing more than 284 species of birds like greater pied hornbill, ibisbill, migratory goosander, red-stars, wagtails, the rare black necked crane, migratory common teal, black stork, large whistling teal, minivets, and ferruginous pochards and the proximity of Raimatang with Buxa Forest has made it a birding paradise for avid bird watchers. If the tourists are feeling more adventurous they can opt for trekking towards Lepchakha Village which offers an astounding panoramic view of Bhutan hills, lush forested area of Buxa National Park and 12 river streams meandering through Dooars, the amazing vista is sure to leave the tourists spell bind. Taking a stroll along the river bed of Raimatang while witnessing the enthralling sight of hundreds of colorful butterflies flocking above the meandering river stream backed with the view of lofty green mountains, it's a sight which has left travelers spell bound by the beauty of Raimatang. The nights in Raimatang are peaceful and calm only broken by the hooting of owls and chirping of crickets while the moonlit forest create a mystical ambiance in Raimatang a sight to be cherished for the life time.

Catch the glimpse of pristine Dooars by visiting the serene hamlet Raimatang where nature has nature has showered its goodness. Far from the rambunctious city amidst the verdant forest of Buxa Tiger Reserve of Dooars, Raimatang is an ideal place to spend a laid back weekend with your loved ones while adoring the beauty of nature.

Dooars region experience a heavy rainfall due to which National Park and forest reserve remains close during monsoon season from mid July to mid September, so it for the best tourist are recommended to avoid monsoon season. To witness an enthralling view of Dooars region and Bhutan hill while trekking to Lepchakha from Raimatang winter season from November to mid January when the sky remains clear is the best time to visit Raimatang.