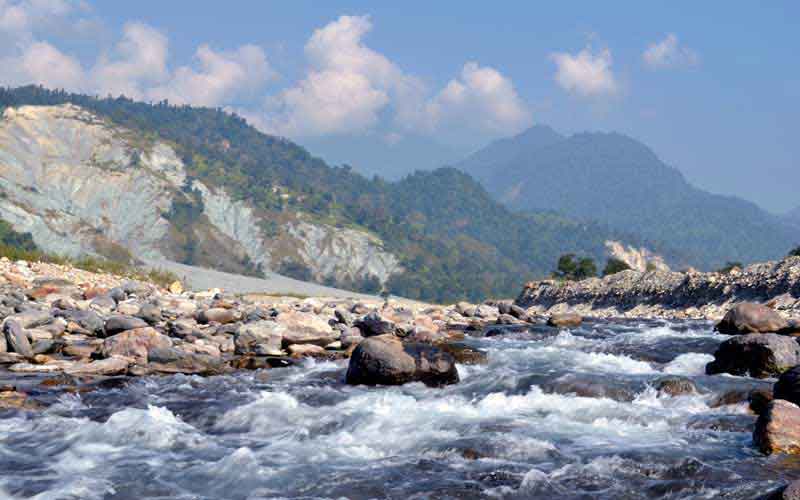 Located at a distance of 60km from Jalpaiguri near the Indo-Bhutan border is a new found destination of Dooars region called Chamurchi. Far from the bustling city, Chamurchi is a small village situated near Banarhat is known for its scenic beauty. Banarhat is an important town of Dooars region which acts as the melting pot for 23 tea gardens. Chamurchi is still a less trodden destination making it a tourist rush free zone. Endowed with abundance of natural beauty, the nature bound Chamurchi with its serene ambiance and untainted beauty has ensnared the heart of tourist who has come across this virgin destination of Dooars. One of the major attractions of this quaint village Chamurchi is the breathtaking view of Mt. Kanchenjunga.

Tourist Places to see in Chamurchi

Strategically located amidst the lush tea gardens, daunting hills of Bhutan, and cascading river valley the road leading towards mystifying Chamurchi is filled with astounding view of changing landscape making the journey an unforgettable experience. Throughout the journey towards Chamurchi the view of lush tea garden and semi-tropical forest accompanies the travelers. But one of the most astounding vistas offered during the journey is witnessed while crossing the iconic Coronation Bridge. The panoramic view of river Teesta meandering through the lofty mountain hills dotted with alpine forest has mesmerized many travelers. Located little off the main route of Dooars, Chamurchi has many pictorial places sited in an easy trekking distance which are an added charm to visiting Chamurchi like the Musical Stone Cave. Located 3km from Chamurchi along the bank of river Diana is the Musical Stone Cave. As the name suggest the unique cave produces music when a stone is tossed inside the cave hence the name Musical Stone Cave. The 3 hr trekking route from Chamurchi to the Musical Stone Cave takes the tourist through the verdant flora and fauna surrounding Chamurchi along the bank of river Diana where they might even some wild inhabitant drinking water from the shore. Locals consider the cave as a temple of lord Shiva and large number of people visits the cave temple especially during the Shivaratri festival period. Enclosed by dense forests like Garuchira, Kalapani and Rohiti Chamurchi is blessed with rich flora and fauna, and the tourist who want to explore the virgin forest area of Chamurchi might even spot leopards, elephants and gaurs. Another primary attraction of Chamurchi is the tea garden. The quaint tea gardens of Chamurchi though not in a good condition can still attract tourists. There is a Mukti Bungalow in Chamurchi which not many people know about. The bunglow with its eerie ambiance has hyped the interest of many travelers. Located close to Bhutan border, tourist visiting Chamurchi can also make a day visit trip towards the picturesque hamlet Samchi of Bhutan. Samchi is one of the 18 gates through which the Bhutanese used to travel to the plains of India and it is famous for its magnificent monastery. Taking a stroll along the bank of meandering river stream Diana while feasting the eyes with the vista of snow capped fortress looming over the emerald green can be an ideal way to spend a laid back evening in Chamurchi while adoring the beauty of nature.

Far from the maddening crowd is a nature bound hamlet which has become the sojourn for the tourists who wants to find solace amidst the nurturing lap of Mother Nature. Concealed from the eyes of many travelers, Chamurchi a scenically blessed hamlet of Dooars region with its daunting hill, cascading river and dense mixed forest has become the paradise for nature lover who are traveling in Dooars.

Blessed with temperate weather the pristine natural beauty of Chamurchi can be enjoyed throughout the year but to get an unparallel view of Mt Kanchenjunga winter season from mid November to January when the sky remain clear is considered the best time to visit Chamurchi.