Sited beside the meandering Raidak River, Raidak is one of the scenically blessed sites in Dooars where nature is so green. The forest of Raidak is one of the elephant corridors of Buxa Tiger Reserve. Even though Raidak is not like any other prominent forest of Dooars but it does not lack any wildlife. So, with our Raidak Tour Packages, have a tour of this prominent tourist destination and its nearby sightseeing places. 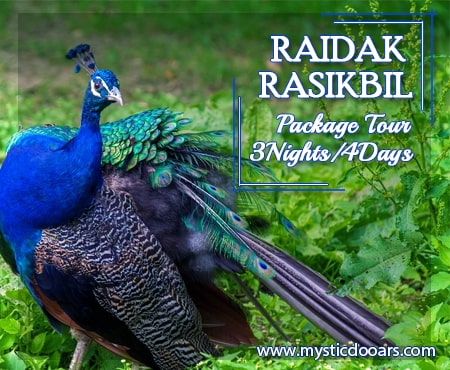 Raidak Package Tour for 4 Days will take you to some of the mesmerizing parts of Dooars. Here are the amenities you will get during your trip. 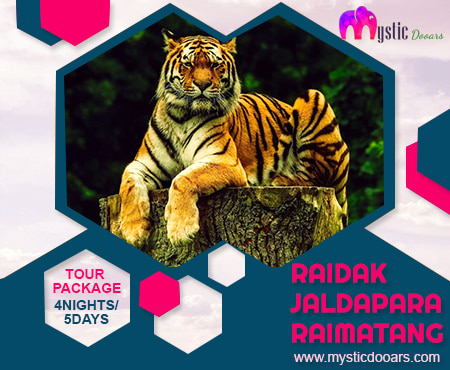 This exact tour plan for 5 days is one of the most popular Raidak Tour Packages. With this particular tour plan, you can cover most of your preferred destinations within just the span of 5 Days. 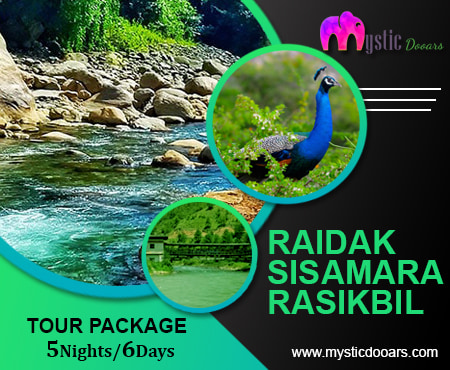 This tour plan for 6 days is considered to be the longest among all the Raidak Tour Packages. If you opt for this particular package, you are going to explore all the holiday sightseer attractions in and around Raidak.

Our Tailor-made Raidak Tour Packages is made in a way to satisfy every kind of travellers. Whether you are a nature enthusiast or an adventure seeker, our exclusively designed Tour Packages of Raidak will fulfill everyone’s requirements. Here are some of the sightseeing places you will be exploring with all of our tour plans.

In our Raidak Tour Packages, Jaldapara National Park is a notable place due to its rich flora and fauna. Jaldapara National Park formerly known as Jaldapara Wildlife Sanctuary is a national park in the Alipurduar District of West Bengal. Here you can spot one-horned rhinoceros, Royal Bengal Tigers, Deer, Bisons, Elephants and Indian Python while having a jungle safari amidst the jungle.

Along the side of Raidak River, Raidak is one of the picturesque sites in Dooars. The forest of Raidak is one of the elephant corridors of Buxa Tiger Reserve. It is not like any other prominent forest of Dooars but surprisingly full of wildlife like others. While having a trip with our Raidak Tour Packages, you can spot elephant, leopard, hyena, Himalayan Black Bear, jackal, etc.

Raimatang is a little adjustment situated beside the widely renowned Buxa Tiger Reserve. It is situated on the riverbank of the shimmering Raimatang River. It is far from the clutch of urban life. Due to its serene ambience, Raimatang and its nearby destinations are thriving rapidly as one of the tourists’ first choices in Raidak Tour Packages. Moreover, the watchtower of Raimatang added extra charm to this place. You can see the dense forest of Buxa Tiger Reserve from the watchtower.

Dwelled on the banks of river Torsha, there is an astonishing yet less trodden destination named South Khayerbari. There are a leopard and Royal Bengal Tiger Rescue Centre where you may spot many wild animals. Unlike other forests of Dooars, the forest of South Khayerbari does not remain closed during the season of Monsoon.

Sited beside the Jaldapara National Park, Totopara is the village of Toto tribe. This home of one of the ancient tribes in West Bengal is near the Indo-Bhutan border. While visiting it with our Rasikbil Package Tour, you will witness the unique culture, heritage and lifestyle of them.

Sited on the fringe of Jaldapara Wildlife Sanctuary, Sisamara falls under the must-visit villages in Dooars. The shimmering Sisamara River flows beside this magical hamlet. This less trodden settlement was once a free-roaming area for wild animals. Like other villages of Dooars, you will absolutely enjoy the mesmerizing atmosphere of this breathtaking abode with our Raidak Tour Packages.