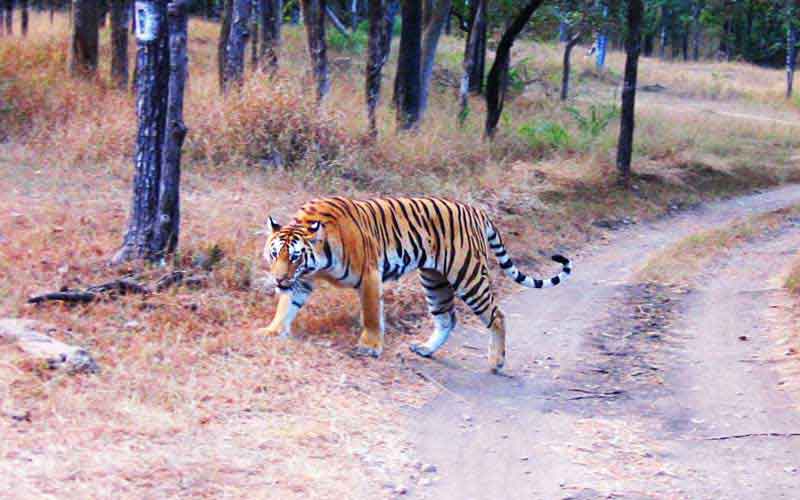 Nestled in the foothills of Himalayas close to Bhutan and Assam border is a nature endowed place, Buxa Tiger Reserve. Located at a distance of 19km from Alipurduar before being entitled as the 15th tiger reserve of India in 1983, Buxa Tiger Reserve was known for the dolomite mining. Surrounded by the lofty hills of Bhutan, Buxa Tiger Reserve is the largest forest in North Bengal and has the second highest population of Royal Bengal Tiger in West Bengal after Sunderbans. The astounding trekking route through the thick wooded forest dotted around the Buxa Tiger Reserve has made it a favored adventurer hotspot of Dooars Region.

Located at northeastern edge of West Bengal, the journey towards Buxa Tiger Reserve is an astounding experience which is full of pictorial sight of changing landscape ranging from the view of lush tea garden to paddy fields. One of the best views witnessed before entering the luxuriant forest land of Buxa Tiger Reserve is considered to be the panoramic vista of roaring River Teesta meandering through lofty mountain hills offered while crossing the age old Coronation Bridge. The road leading towards the Buxa Tiger Reserve is a visual treats for travelers who as aspire to adore the beauty of nature endowed places. The verdurous forest of Buxa encircled by the sparkling river stream create a breathtaking scene which shows the glimpse unsullied beauty of Dooars region. The verdant forest of Buxa Tiger Reserve is blessed with rich bio-diversity and the best way to appreciate the beauty of Buxa is by going on a jungle safari conducted through the various forest lodges which is dotted across the dense forest. The jungle safari of Buxa Tiger Reserve lets the visitors venture upon the less trodden parts of Buxa Tiger Reserve where they can spot animals like Barking Deer, wild elephant and if lucky might get to see the Royal Bengal Tiger lazily roaming in the tall grassland. There are many pictorial places to visit within the dense wooded forest of Buxa Tiger Reserve like the picturesque river valley Jayanti. Enclosed by the verdant forest on one side and daunting hills of Bhutan on the other the river bank of Jayanti is an ideal place to enjoy the serenity of Buxa. Apart from being blessed with abundance of natural beauty, Buxa Tiger Reserve is also an historical significant place of Dooars. Amidst the dense forest lies the historical Buxa Fort or the remains of it, which was used by the British to keep the leaders of India's Independence movement in secluded confinement. The ruin of Buxa Fort still holds the essence of patriotism luring the historian towards the dense forest of Buxa Tiger Reserve while traveling to Dooars. The astounding trekking route of Buxa which has hyped the interest of adventurer traveling to Dooars leads the trekkers towards some of the most pictorial places Dooars the famous one being towards Lepchakha Village. Sited in the hilltop of Buxa Tiger Reserve near the Indo-Bhutan border Lepchakha is a quaint Drukpa village which has caught the attention of forest dweller through its magnificent vista of 12river stream meandering through the plains of Dooars region.

Buxa Tiger Reserve far from the bustling city enriched with the luxuriant forest with the touch of history has become the solace for many travelers who are wants to isolate themselves for the hassle of mundane life whilst witnessing the pristine nature. Dwell amidst the ruin of decades old fort which still holds the lingering essence of patriotism while listening to the alluring sound of wilderness in Buxa Tiger Reserve.

Buxa Tiger Reserve mostly experience a hot and humid weather and the best time to visit Buxa is considered to be the post monsoon season from October to May when the weather is much more soothing, March to April being the best time, since animals emerge to feed on the new grasses and become an ideal time to spot the shy herbivorous like Bison and Rhinoceros.