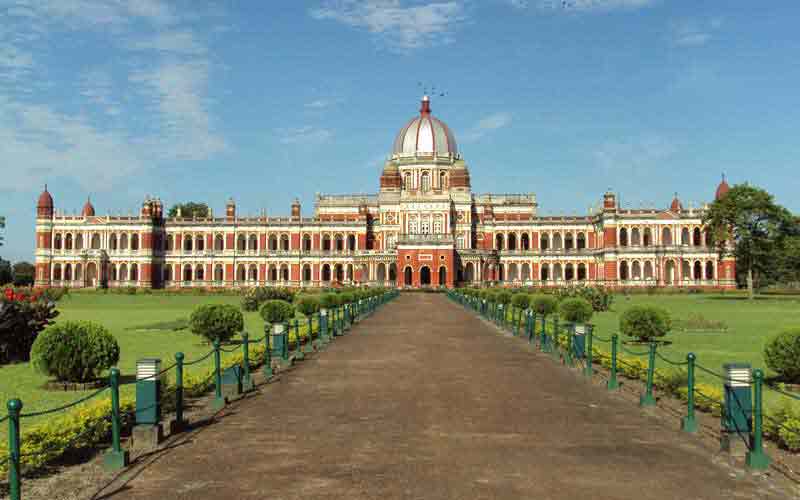 Sited in the foothills of Eastern Himalayas in the northeast area of West Bengal, 26km from Alipurduar and 95km from Jalpaiguri is the largest and only planned town of North Bengal region, Coochbehar. Enriched with soothing climate and rich flora and fauna, once the princely state, Coochbehar has ensnared the heart of travelers making it one of the favorable destinations of Dooars region. Coochbehar is also the maternal home of the Maharani Gayatri Devi, the 3rd Maharani consort of Jaipur. The name Cooch Behar is derived from the name of the Koch or Rajbongshi tribes indigenous to this region for many centuries.

Sightseeing Places to visit in Coochbehar

The journey towards the regal city Coochbehar is filled with astounding sight of changing landscape offering a visual treat for the tourists. Traveling towards Coochbehar, while being accompanied by the view of paddy field, lush tea garden and quaint settlement is an unforgettable experience in itself. Coochbehar declared as the historic town of West Bengal has many pictorial sites with great historical importance which has hyped the interest of many historians, luring them towards Coochbehar, the most significant one being the famous Coochbehar Palace, the iconic landmark of Coochbehar. Built in 1887 under the command of King Nripendra Narayan Bhup Bahadur, Coochbehar Palace or Raj Palace or Victor Jubilee Palace is inspired by the Italian renaissance and designed on the model of Buckingham Palace in London. The gigantic Coochbehar Palace was built in Indo-Saracenic Revival archicture combining British architectural style with Mugal style. In 2002 a museum has been set up inside the palace depicting the culture of the local people as well as the royals of Coochbehar. Apart from being a historic scenically blessed town, Coochbehar is also a pilgrim centre for many devotees. Located at short walking distance from Coochbehar Palace is the historic temple of Madan Mohan which is known to be considered as one of the sacred place in Coochbehar. Madan Mohan is the "Kul Devta" of the Cooch Kings. The Madan Mohan temple was built by the Cooch king Nripendra Narayan in 1889. Located 10km from Coochbehar is another sacred temple called Baneswar Temple of Lord Shiva which was built more than 400 years ago. The lake near temple is the home to many tortoises some of which are considered to be many decades old. From sacred temple to the ruins of Rajput mounds the beauty of Coochbehar never ceases to amaze the traveler but that not all. Located at one and half hour distance from the Coochbehar Palace is serene lake called Rasik Bill. Sited amidst the dense forested region, Rasik Bill creates a perfect ambiance for housing a large number of avifauna like Rasik Beel - Lesser Whistling Teal, Common Teal, White eyed pochard, Red Crested pochard, Shoveler, Pintail, Wigeon duck, Grey headed Lapwing, Northern Lapwing, Pied Kingfisher, Stork billed kingfisher, Small blue kingfisher, Little Cormorant, Large Cormorant, Gadwall etc making Coochbehar a birding paradise for avid bird watchers. There is a deer park and a crocodile rehabilitation center by the side of the lake. There are also a leopard house, a python house, Aviary & a Tortoise rescue Centre.

Coochbehar, a scenically blessed town of Dooars region has become the hub for historian and inquisitive travelers who wants to learn more about the royals and culture of Cooch Dynasty. Coochbehar has its own phase of life where tourist can relish the verdant forested area while catching the glimpse of regal era in the magnificent architecture. A scenically blessed place with the touch of history, Coochbehar with it serene ambiance and laid back style has become a must visit destination for nature lover and historian traveling in Dooars region.

Blessed with the temperate weather the beauty of Coochbehar can be relished throughout the year but if the tourists want to enjoy the diverse cultural aspect of Coochbehar festive season is considered the best time to visit the regal city Coochbehar.